The Good, the Bad and the Ugly of Latin American Politicians Embracing Cryptocurrency 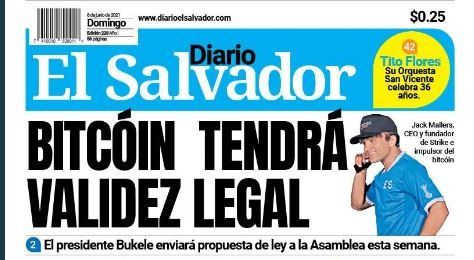 So the big story out of The Bitcoin Conference 2021 in Miami last week, was the announcement from the current President of El Salvador – Nayib Bukele, that it will propose a bill for Bitcoin to be legal tender in the Central America country. Which is a bold move to say the least and getting a lot of backing from notable tech thought leaders like Balajis. Crypto exchange founders like Pablo Gonzalez and CZ discussing openly their support.

I am not an economist or a political analyst, just a crypto enthusiast that lives in a 3rd world country (Mexico). What I have to acknowledge is that I am writing this in a position of privilege compared to the rest of the population in Latin America region. I work in tech and have been a digital nomad for most of my professional career and have shared it’s shortcomings with the HackerNoon community a few years ago.

The reason I am sharing my opinion with the HackerNoon community is that we are starting to see politicians from Latin America getting #LaserEyes. This will start to generate momentum for the crypto industry in the region outside the techies, enthusiasts and speculators.

This is a great opportunity to expose people in the region to crypto, but there a three sides to this event happening in social media (the bill is yet to be approved). So I will try to do my best to share my perspective on the impact of all these events in the region.

As more politicians start to learn and understand what crypto is and how it will enable financial freedom, our hope as a region is that legislations proposed enable the creation of innovation in the region and help platforms to flourish.

Brazil, Mexico, Colombia and Chile have started to legislate and accommodate Fintech Startups from the region such as NuBank, ALBO and Belvo to grow in each country. A recent study from Andreessen Horowitz points out the growth potential that the region has:

Crypto is still in a very early stage of adoption, but some numbers shared by Bitso, one of the regions top crypto exchanges shows that more than 2 million users are trading in the platform and opening up their Brazil operation with the recent $250 million funding round. They where instrumental in getting the Ley Fintech in Mexico passed and giving a lot of guidance to Mexican legislators, it has yet to evolve but it was a good start.

Now Colombia is piloting a crypto program called La Arenera (Sandbox) with 15 companies taking part in it which includes banks and exchange such as Bitso, Binance, Gemini, Buda, Obsidiam, Banexcoin, Panda and Bitpoint. The region is seeing interest from the crypto industry and the governments are responding the best they can 😉

The Bad – widespread adoption is low

Even with all the social media headlines and a couple of global newspapers covering the story of El Salvador, we can see clearly in Google Trends that searching for the term “Bitcoin” has not spiked at all.

The chart you see here is from searches in El Salvador over the weekend until June 8th.

Here is a chart from Colombia from the first seven days of June 1 to 8; similar trend. Which as you can see was unaffected from the news from the Bitcoin Conference in Miami.

Last chart is from Mexico, which shows the same results :-/

In Twitter we had seen a lot of opinions being shared, overall the impact will be important for the region and this will be how we start having conversations in our local cafes, meetings and family gatherings (hopefully). For those of us that have been in the LatAm tech space for a couple of years, we know that these changes take a lot of time and that governments are not risk takers .

So with a lot of laser avatars crossing the Twitter sphere, the proof is in the pudding. We will have to wait to see how all these proposals start to materialize into progressive and innovate legislation that will empower the new batch of creators and builders.

The Ugly – difficult onramp in the region

The countries in the region that have embraced crypto are Venezuela and Argentina. Both have seen in Bitcoin and ETH as a channel to avoid the troubles of their fiat currencies. They are leading the way in creating solutions in the space such as Ripio Credit Network, Open Zeppelin and Proof of Humanity.

For the rest of the region such as Brazil, Mexico, Peru, Colombia and Chile, those of us who are in the space are generally involved in the tech industry. Those that are risk tolerant have been making bets in the protocols and DeFi technology being built on top of Ethereum, Solana, NEAR, Polkadot, Ripple and Cardano.

But with all this innovation being available to anyone with an internet connection, buying crypto is still not easy for ordinary citizens from the region. There are a couple of Bitcoin ATMs and even physical exchanges but these are not widely available throughout the cities of each country.

Then there is the taxing of the transactions and financial Institutions from governments who have stuck their head in the sand. So there is still a lot of grey area which some power users have taken advantage of. People that talk crypto are seen with untrusting eyes. Of course we had our fair share of scammers in the region, so a lot of people got burned in the last bull cycle. Some learned but we have a lot of newcomers as well.

Education for newbies and also most importantly for the new generation of developers to understand the potential of building on top of the blockchain is critical for the industry to flourish in Latin America. Hopefully all these media coverage will have a positive impact and get new interest in this space.

Communities such as Bitcoin Beach in El Salvador will provide a new paradigm for how cities or towns can embrace crypto. The creation of local/regional communities supporting specific protocols such as NEAR Hispano and group of enthusiasts sharing knowledge such as Blockchain Academy will sprout the new generation of creators and builders coming from Latin America.

So looking forward to the next bounce off the ball which will definitely be bouncing in the Latin America region for the next decade.

Create your free account to unlock your custom reading experience.

Beginner’s Guide to DeFi and How it is Helping Us