New Delhi [India] June 13 (ANI/SRV): Analog is one of the most popular types of cryptocurrency, which is a type of digital currency that started on the INRx Network. The coin will go on sale on Analog Inceptive in August 2022 for 1 INRx (0.013 cents), but it will quickly rise above 10 INRx (0.13 cents) in the Future IDO. INRx Network was started in 2021, and in October 2022, at a price of a few cents per coin, it started to trade on the public market.
INRx Blockchain mechanism developed own Secured ecosystem and Network-
INRX is a Decentralized peer-to-peer Distributed ledger Technology. It’s an open-source public Blockchain operated and organized by Democratic Elective Organization (DEO). The aims of INRX Blockchain provide a decentralized less-permissible open-source system for transactions. INRX Blockchain Governs 22secured and simple transaction rules. The DEO will observe and process the Block system. INRX Blockchain has facilities with decentralized applications Decentralized Financial Reserved (DFR), Decentralized File Store System (DFS), Micro Payment System (MPS), and Stable tokens. Within INRX Blockchain produced Digital Assets ANA & Stable currency INRx. INRx Blockchain aims to provide secured Digital Assets and replace virtual Wallet Currency.
INRx Network was created by Aman Vaths, who also helped start another popular Blockchain Development company called Nadcab Technology. It uses blockchain technology to run on a decentralized public ledger and was made by vaths. Blockchain keeps track of and manages the cryptocurrency by keeping a record of and putting in order every transaction that uses it. 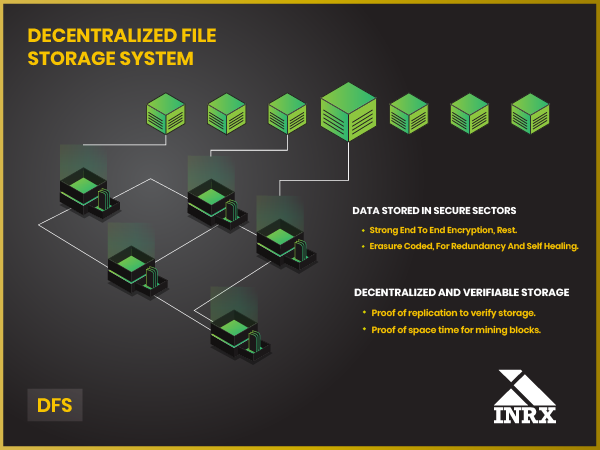 This decentralized mechanism validates transactions, checks their integrity, and contributes to the system’s robustness and error-free operation as a whole. INRx Network employs a technique known as “proof-of-stake,” in which currency owners are tasked with confirming transactions in exchange for a payment.
A Network for decentralized finance usability-

INRx enables several different features on its platform: Currency-with a cryptocurrency wallet, you can send and receive Analog or transfer it in exchange for goods and services; smart contracts-INRx Ecosystem enables smart contracts, which are contracts that automatically self-execute when the contract’s conditions are fulfilled; decentralized finance-INRx Ecosystem enables people to skip the middleman, such as banks and other financial institutions, to transact directly and on a permission-less basis with other individuals or entities; and Digital apps-As part of decentralized finance, INRx Ecosystem can enable lending, trading, asset management, insurance, and other typical financial services.
So it’s useful to think of Analog as a token that powers various financial services rather than merely currency, though that is one of its functions.
The phenomenon of developing Analog coins on the INRx Network–
As of May 2022, there were about 1,404,902,630 Supplies of Ana which is equivalent to the Indian population, the fixed supply makes Analog comparable to Bitcoin, which has a supply cap of 21 million coins. And this is in contrast to Ethereum, which has an unlimited supply but a limited annual issuance. Dogecoin, another famous cryptocurrency, has an infinite supply.
The INRX proof of stake method enables owners of the coin, who have an interest in maintaining the system’s integrity, to validate blockchain transactions. These validators receive compensation (in the form of crypto currency) for operating the system. However, if validators authorize erroneous transactions, investors may incur losses. And as a cryptocurrency owner, you can stake your coins with a validator and gain a proportional reward, but typically for a price.
Analog coins will be worthy of future investment-
The inaugural rollout of Analog coin occurred in August of 2017, in conjunction with the Analog Inceptive initiative. Prices will begin at a rate of 1 INRx and increase to 10 INRx after the ICO within sixty days of the program’s inception. However, during the second week of the Incentive Programme, Analog will be made available for usage by the general public through BlackpepperSwap for an initial price of 10 INRx. A BlackpepperSwap enhancement was applied to the analog initial planting program. The final price of Ana on dex will be around 25 INRx when the Inceptive initiative comes to a close. That will result in enormous profits for those who invested in Analog Inceptive.
This story is provided by SRV. ANI will not be responsible in any way for the content of this article. (ANI/SRV)